Last year I did not write any blogs.  I flew to Turkey with Papa and Tutu in July last year.  We had fun sailing but did not really go anywhere.  This summer I flew to Athens with my cousin Zachary and met Papa and Tutu at the Athens airport.

The first day we went sailing the wind was over 30 knots and we were heeled over.  It was not supposed to be that much wind.   It was rough sailing.  The next day we went through the Corinth Canal.  The Corinth Canal was first thought of by the Romans , but they didn’t have the technology to make a canal through the high stone. While we were motoring through the canal we spotted a couple of red marks on the walls of the canal. Somebody got some scratches on their boat.

Papa let me drive through part of the Corinth Canal.

One day we took a bus up a long, winding mountain path to see Delphi. We didn’t walk all the way up because all the artifacts were in the museum.  When we walked to the ticket station to get into the museum we discovered that we didn’t have to buy tickets, because it was children’s day.  We paid too much!

When it rains in Greece it doesn’t rain water, it rains Sahara Desert.  If you don’t wash off the red sand immediately after it rains the sand will never come off.  The town dock where we stayed when we went to Delphi did not have any water.  Papa said we had to wash the boat with sea water.  So we hauled up buckets and buckets of sea water and washed the red sand off.  As soon as we washed the whole boat off with sea water, it started raining again.  We gave up after that.  In one of the anchorages we saw a fresh water spring in the sea water.  It looks like a whirlpool.  It made a large perfect circle that bubbled all around the edge.

One day we did the overnight sail/motor to Montenegro.  On my watch with Papa starting at 2 am we drank hot chocolate and ate pound cake and buttered toast.  The moon was full that night.  I stayed up for 30 mins or more then I went to sleep.  Papa stayed awake by himself for the rest of the night.

In the old walled city of Kotor in Montenegro we arranged a tour to see the canyons.  We traveled with some Australian people on the canyon tour. On the canyon tour we saw a monastery, a black lake and a big deep canyon. The monastery supposedly has good coffee.  I did not drink any.

The black lake is not black. The canyon is really long and a good place for whitewater rafting.  But this year the river was too low for rafting.  They did not have much snow last winter.  We also ate burek -- meat or cheese filled pastries.  I liked the burek.  Especially the meat ones.

Dubrovnik Croatia is a old Venetian walled city with good ice cream and American food. We took a ferry to Dubrovnik from Cavtat.  We anchored around the point from Cavtat harbor.  First thing we did in Dubrovnik, we found a place to eat.  I ate a pizza.  Then we continued walking when we saw a Mexican restraunt. We should have eaten there.  Then we tried to find a T Mobile but failed. Then the inevitable happened, it started raining.  So we headed back to the ferry and went home.

The day before I flew home a sudden storm blew through the anchorage.  Tutu said this kind of storm is called a bora or bura in Croatia.  The wind was over 50 knots and really strong.  Papa pulled up the anchor and we moved out to sea to wait for the wind to die down.  He had a big problem with the dinghy during the storm.  Zachary went to the back of the boat and helped Papa but Tutu made me stay in the cockpit with her.

Sometime during the storm the computer that Tutu uses to drive the boat died for a while.  I ran and got the tablet and turned on the Navionics charts and held the tablet so Tutu would know where we were while she drove the boat.  It was hard to see during the storm and hard to tell where we were.  Waves were splashing up over the boat while we were still inside the anchorage area.  After Papa got the dinghy fixed and the storm died then we went back to our spot and anchored again.  That was exciting.

The day before I flew home Tutu baked me a birthday cake and we celebrated my fake 13th birthday since I would not be on the boat on my real birthday in a couple of weeks.
The next morning Tutu took me to the airport in a taxi.  I was flying home by myself.


(Paragraphs below were added by grandmother.  This is what Elisabeth emailed to us about her flights back to Houston.)

In the Frankfurt airport I had to wait 4 hours for my flight to arrive. When my flight did arrive, the plane had a malfunction and could not take off till the next day. The company, United, gave us rooms in a hotel. The hotel filled up and I had to wait another hour till they had more rooms. When I finally got to the check in desk I had to call my dad, because I'm 12 and I needed permission to stay in the hotel.

The next day I got up at 5:30 to get to the Z terminal but they didn't open till 6:30. Then I had to wait 2 more hours for them to finish fixing the plane.

Over Canada, the engines cut out momentarily and then came back on. Everything after that was fine.

I suggest not taking United Airlines from Frankfurt to

Houston unless you can donate duct tape to United!

Posted by Kizzy Cosplayer at 4:17 AM 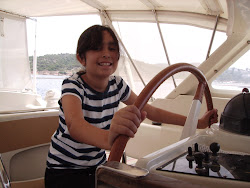 Me as captain of yacht BeBe